2015 was a great year for sellers of Real Estate in the Portland Metro Area, and 2016 should see that trend continue. 2015 saw Portland post some remarkable statistical increases, including a record setting July with more closed home sales than any July on record, and an October where Portland home prices rose faster than any area in the country. Despite that fact, housing inventory remained low, staying under 2 months until the end of the year. Many Portland homeowners saw their property values rise 10% or more, and those who chose to sell their homes often saw bidding wars take their sale price above the list price. Mainly, rising home values are due to a low inventory of for-sale homes, combined with a stable economy and steadily increasing demand from Portland’s growing population. Many sources have ranked Portland in the Top 5 housing markets in the U.S. right now and for 2016, based upon data collected last year and favorable economic and demographic trends projecting into 2016 and beyond.

It’s a numbers game. In-migration to Oregon, especially Portland Metro, continues to add more population than the existing inventory of homes can absorb, and the construction of single family residences has not yet returned to pre-bubble levels yet. The trend of in-migration to Portland shows no signs of slowing. In fact, United Van Lines has ranked Oregon as its “Top Moving Destination” for 3 years running. When this data is viewed in the context of the low housing supply in Oregon, it is easy to see why the sale prices of homes in Portland Metro have increased every quarter for each of the last 3 years.

Additionally, Portland homes remain affordable when compared with other major US cities’ housing stock, most notably that of close metro neighbors San Francisco and Seattle. Out of state buyers from markets with higher pricing than here in Portland also contribute to the rise in home values and sold-home-prices, as these buyers are less sensitive to the rising prices of the Portland market and often have more cash to leverage in the home purchase.

Until the construction of Single Family Homes starts to significantly increase, the low supply and steadily increasing demand should keep the Portland Real Estate Market trending in a direction favorable to current Portland homeowners who wish to sell their home. 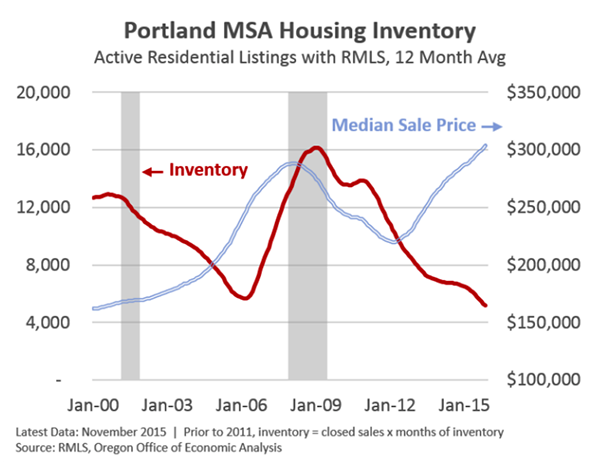 Shadow of the Past

One dominant issue in the Real Estate market in recent years didn’t even happen this decade, and if you talk to homeowners it comes up almost without fail- The Bubble. People have long memories, especially when significant economic pain is attached to that memory. The Housing Bubble, and its role in the Great Recession, has cast a long shadow on the market. While median home values have increased beyond peak 2007 levels in many cases, the specter of another housing bubble has many homeowners and buyers still wary of entering the market. Stricter regulations spurred by the Dodd-Frank Act have made it more difficult to acquire mortgage debt for the average consumer, although those who do qualify have been enjoying historically low mortgage rates. This has helped fuel the bidding wars in the market, as mortgages initiated with favorable interest rates help homeowners lock in long term asset management strategies. Good mortgages help make good assets.

Regardless of the psychological impact of the Bubble on the housing market in the past few years, by most indicators the present is a very good time to be selling your home. On a macroeconomic level, the large cohort of Millennials is entering the U.S. housing market in their prime buying years, and just as many of the large cohort of Baby Boomers are entering their retirement and downsizing years.

According to Jonathan Smoke, chief economist at Realtor.com, “Assuming that most of these households will both sell and buy, it is important to recognize that 2016 is shaping up to be the best year in recent memory to sell. Supply remains very tight, so inventory is moving faster. Given the forecast that price appreciation will slow in 2016 to a more normal rate of growth, delaying will not produce substantially higher values, and will also see higher mortgage rates on any new purchase.” Smoke predicts a 60 basis point rise in the average mortgage rate by the end of 2016, indicating that the Fed’s decision to raise the rate again has signaled a turning point for the availability of historically low mortgage rates.

Real Estate relies more on local markets, though, and another major factor in making Portland a great place to sell right now is the rental market, which has also been stretched by in-migration and has had one of the nation’s lowest vacancy rates for a number of years running. This has caused Portland rental prices to skyrocket even faster than housing prices, driven by the same metric of low supply and high demand. At the same time, financial qualifications for renters have become stricter, making the rental process more costly and difficult, especially for those with lower than average credit scores. These factors should contribute to a larger percentage of the rental pool deciding to buy a home, rather than continuing to rent, as the price of rent continues to rise.

The most important factor will remain supply and demand, though. When demand is high, and supply is low, the price goes up. That makes 2016 a very good time to be a home seller in the Portland Metro Area.

We love to talk, share, and be friendly. Connect with us on your favorite social media.